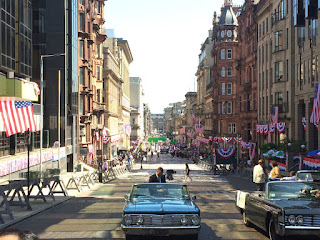 Now the nights are really drawin' in (without any actual 'comic drawin' goin' on at Braw Towers) it's time to turn back the clocks, a little more than an hour, to July, to a happier time (ie. before the unsustainable infrastructure of Western society began its inevitable, slow collapse) to set the scene, er, for another instalment of 'you seen the set', following on from Agent Rob's successful stints for JAWS, Cheers, ahm, John Squire and, uhm, the cultra-obscure sitcom Naeturvaktin. Of course, the main difference here is that this turn around the set actually came to see Rob.... 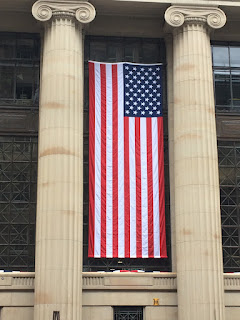 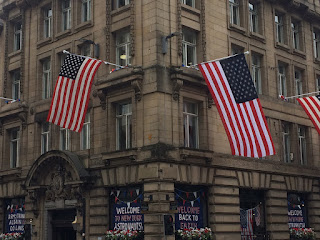 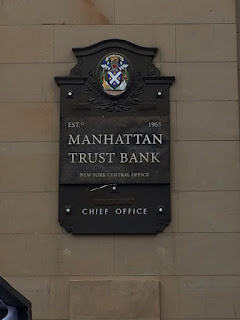 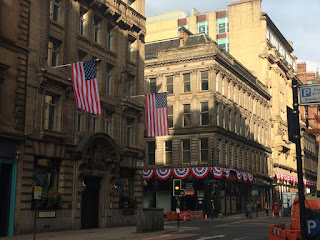 Yep, imagine the surprise/delight when he emerged from Glasgow Queen Street Station low-level, blinking into the early morning sunlight of the 7th of July to find that none other than New York City had taken up residence in Glasgow for the purposes of filming for Indiana Jones 5 (which, y'know, he hopes will echo director James Mangold's 'Logan' and simply be called 'Indiana Jones').... 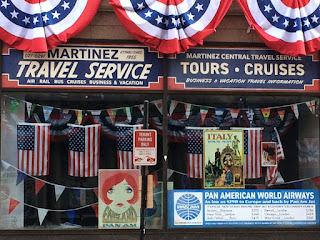 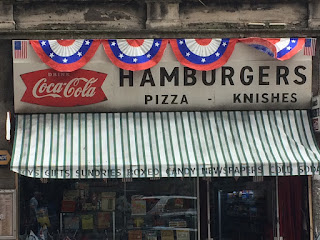 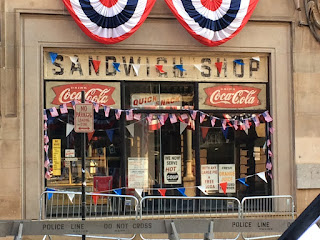 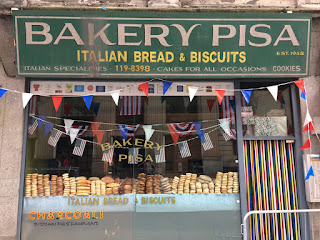 It was obvious that Di$ney would attempt to wring every last buck out the franchise and evidently wouldn't let it lie without digging up Indy, or, indeed Harrison Ford, for a fifth crack of the whip. With The Kingdom of the Crystal Skull but a bad memory for most – tho Rob quite likes it actually, it apes the one-two structure of The Last Crusade nicely, Steven Spielberg's steady hand/cam providing a visual consistency as it flips (and flops?) from Indy and dad to Indy and son for a satisfying enough conclusion. Starts with a nuclear explosion and ends with a nuclear family as Rob always says.... A shame then that the script really needed an extra draft or two while a duff CGI stretch through the jungle is a near turn off. Still, haters can take heart as there's no doubt that this fourth entry in the franchise will be knowingly referenced and retconned (as per The Last Jedi) to satisfy the ever-vocal meatheads who lurk online.... (Still, it could be far worse given there were rumours of a Chris Pratt reboot!) 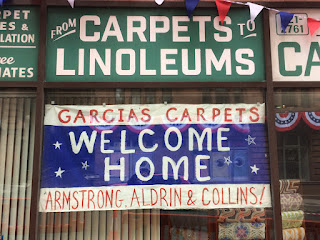 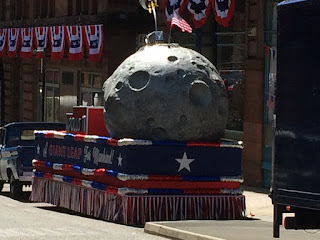 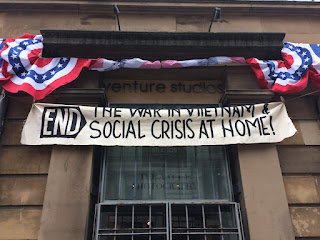 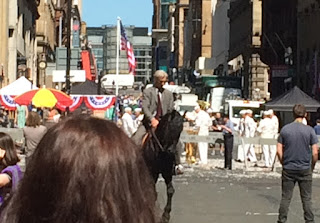 Seeing double....
Here be spoilers? Not really, but you can perhaps join the dots – much like the motion capture ones stuck on Ford's face when filming in Yorkshire, presumably allowing for a bit of 'young school' Nazi bashing to flesh out the plot – to get some idea of what's going on. Not that events in Glasgow revealed much, merely a chase involving Ford('s stunt double) on a horse and (an in person) Boyd Holbrook on a motorbike during a parade welcoming returning astronauts.... 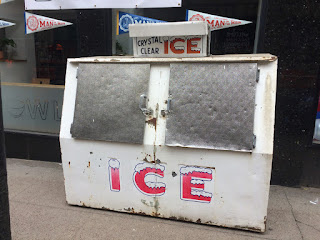 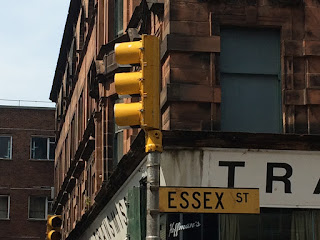 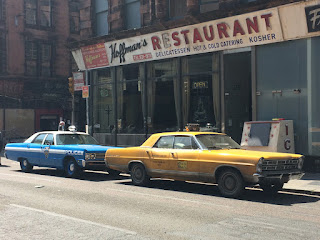 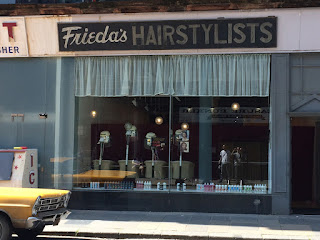 Meanwhile Phoebe Waller-Bridge – surely not playing Indy's daughter?! - got up to some antics on another NYC street.... 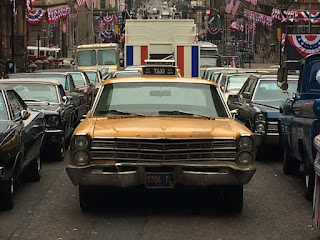 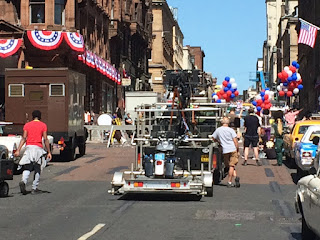 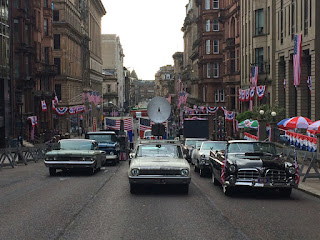 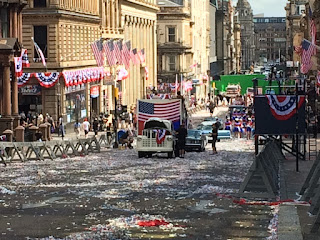 The former scenes were shot principally on St. Vincent Street, with several adjoining roads similarly decked out (and closed for 3-ish weeks) for authenticity (and vehicle/lighting, etc storage purposes). The latter, Waller-Bridge, scenes were shot in the Trongate area of the city over the course of a week, with Parnie Street and surroundings closed for a more modest, but still impressive, transformation.... 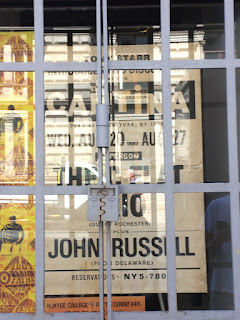 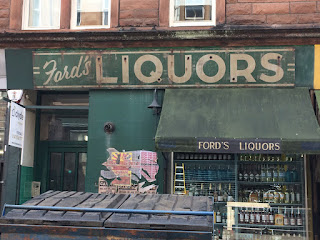 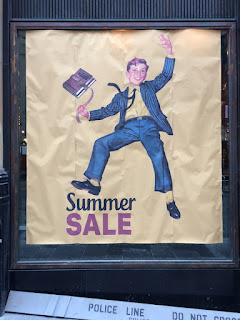 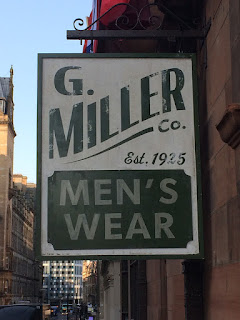 No relation to R. Miller Est. 1975
Unfortunately star Harrison Ford didn't make the trip north of the border for filming as he was recovering from an injury to his shoulder he picked up rehearsing a fight scene – hopefully in those flashbacks as, well, at 78 years of age (going on 80 if the film's mooted release in 2023 is true) it's fairly obvious that Indy should be swapping his action-packed days for pipe and slippers.... 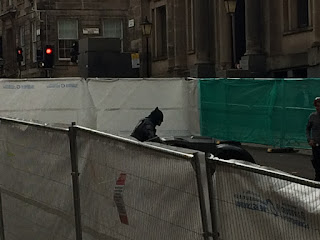 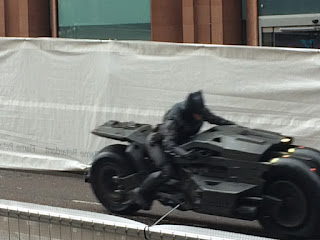 No sooner had Indy gone and packed up his troubles (and his numerous flags) than Batman decided to muscle in on the action, entertaining the crowds by taking his Batbike for an endless spin around George Square, three Gotham Police cars in perpetual hot pursuit.... 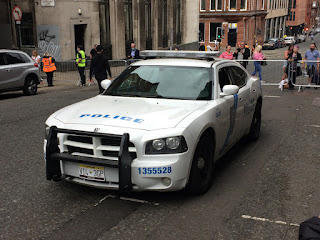 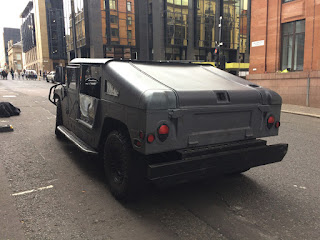 Absolutely no spoilers this time of course, given it's a DC "Entertainment" (in the absolute loosest sense of the word) film - 'Why so serious?!' and deadly dull! - and therefore it's pretty much spoiled already, oho ho ho....
INDIANA JONES | Official Franchise Trailer | Paramount Movies
Posted by noah at 09:55

Email ThisBlogThis!Share to TwitterShare to FacebookShare to Pinterest
Labels: A Braw Blog - You Seen The Set, Film