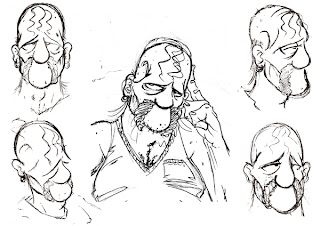 Here we go, a little further down the line in the recreation of Kounter Kultyur Kevn, his head and neck taking on a 'fully posable' shape, cheekbones finally established and the jawline firmly rounded. With a bit of hefty spin, Production "Brawbot" Rob Miller assures us he's about 1/3 of the way through the pencils of this epic....
Posted by noah at 02:41 No comments:

Say you want a Kevolution.... 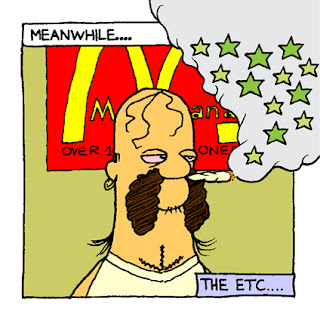 Kounter Kultyer Kevn was always one of the more minimal strips in Khaki Shorts, rarely budging from his chair, the panels themselves mostly scaled traces of a few originals (Rob Miller's thinking being he wasn't spending any more time than absolutely necessary illustrating the adventures of a stoned bum)....

However, Kevn had his fans and the much mooted epic strip - as initially promoted in our post here - is finally being realised. Part of the challenge (and hold up!) was trying to find a look for Kevn that really allowed him to "move around" in a way the earlier strips never did, what with his chunky neck and the resulting unwieldy head. Below are a few sketches attempting to establish a workable appearance that'd make this possible. We'll pop up the first finished results in the next few weeks.... 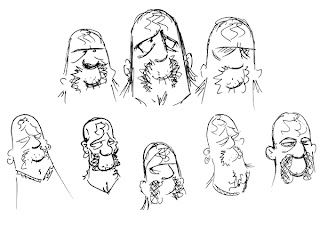