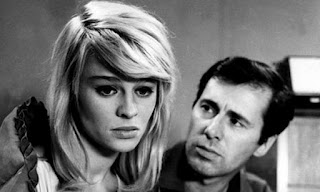 J for Julie Christie shining like a star....
A for Andromeda. A also, of course, for Agents Rob and Johnny. B for Ballard Heights to I for Ice Station Zebra. C for (A) Chronicle of Doom. L for loooooooong overdue - can it honestly be two years?! - and (finally, thankfully!) S for Scockrail (who did everything in their power to cancel and delay the necessary trains needed to make this vital visit eventually happen).... 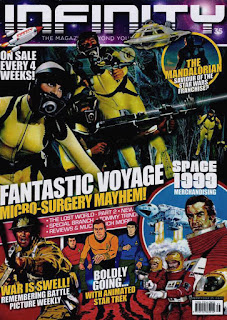 https://infinitymagazine.co.uk
They say that abstinence makes the heart grow fonder and it wasn't very long before Rob banished his mounting 'intrepidation' - Agent Johnny might be even more painfully slo-mo than ever before, but was on sparkling form having definitely landed sunnyside up in Slateford 'after the flood' - and was duly dispatched to the local Postie Office 'fer to buy' some swill to help the 'dafternoon' drift by that little bit more smoothly, our two Agents of S.H.I.E.L.D. chuntering (al)most contentedly, feeling like days of old.... as opposed to these (quite suddenly just) feeling old days....
The 'ungoing' John Stark: Secret Agent comic was discussed at length, Rob offering 'fer to draw' any script that Johnny cared 'fer to think up', given that, at 67(!), the copious 'aches and pains' - cue much grumbling about both being (un)fairly 'f*kt in' - are putting (un)paid to any comic drawin', but, y'know, there's nothing wrong with (dis)gracefully retirin' into the sunset.... 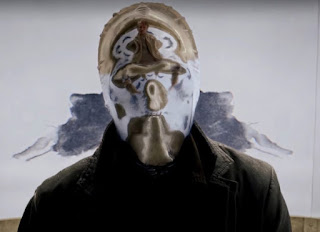 HBO's (somewhat inspired) Looking Glass character
Topics of conversation included everything from the A for Andromeda tv show and Anthology book (pictured above above above), Philip K. Dick, Infinity Magazine (pictured above above), Vampire Circus and everything Watchmen-shaped, with Doomsday Clock, Before Watchmen and the HBO series (pictured above) bringing us full circle and face to face. Round that off, the seconds ticking away, with Johnny reminiscing about seeing Pink Floyd in '71(!) and Grateful Dead in '81 and you have a mighty fine encounter, one worth writing up 'fer to blog'. Here's hoping there's another of these swell swilled dreamy daze soon....
Sounds: Two From The Vault by Grateful Dead....
Grateful Dead - Death Don't Have No Mercy
Posted by noah at 07:03 No comments: