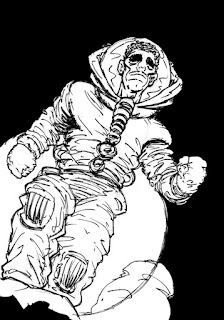 Rough for something that, er, might not turn out to be anything, um....
Posted by noah at 02:09 No comments:

Bacchus to the future.... 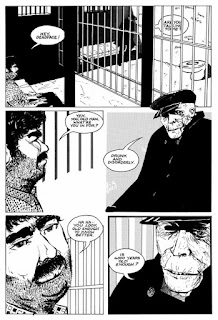 The oft-mentioned blog can be found here....
Posted by noah at 11:17 No comments:

One From The Vault - The Wildebeests.... 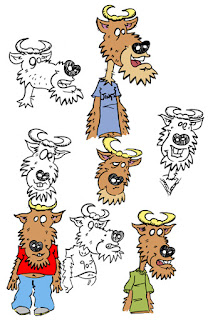 Email ThisBlogThis!Share to TwitterShare to FacebookShare to Pinterest
Labels: A Braw Blog - Electric Soup, A Braw Blog - From The Vault 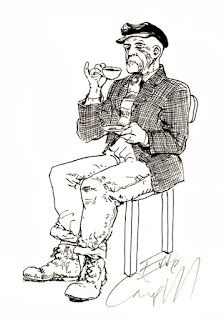 Fortuitous timing for Agent Rob as a pre-planned weekend's jaunt to London town just so happened to facilitate a visit to Gosh! to pick up a copy of the Bacchus Omnibus complete with their exclusive (limited to 100 copies) designed and signed by Eddie Campbell bookplate! Quite a treat! Seems they still have copies in stock to buy online here if you can't visit in person, though the print was numbered 92/100, so all you jacks had better be nimble either way. The more ambitious of you may wish to head over to Top Shelf Productions where they have some limited edition signed hardcovers for sale post-San Diego Comic-Con. These beauties are available here.... More tea, vicariously?
Posted by noah at 02:22 No comments: 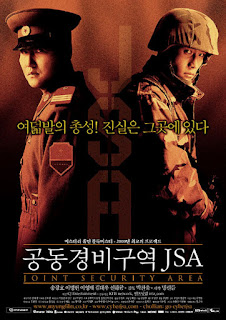 Email ThisBlogThis!Share to TwitterShare to FacebookShare to Pinterest
Labels: Film - World, The 2000s

Michael Moorcock - The Condition of Muzak 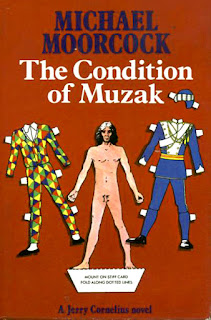 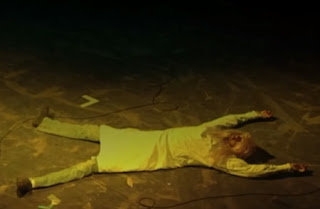 Before? During? After? Always? If you've ever wondered what the prevailing vibe would have been had Kurt Cobain kept it together enough to ghost his way through one more tour then a visit to the Braw Books table at the weekend likely sated your curiosity. Still, behind those soulless masks many comic delights awaited (by which we're not referring to the amusing sight of 2 equally incompetent salesmen hustling their wares), and a good few radio friendly units were duly shifted to a smattering of enthused/bemused punters. Both the cartoon capers of The Khollected Khaki Shorts and the dark doings of Drewer were well received, in part thanks to the encouraging online pre- and post-Con props courtesy of Jim Devlin, George Lennox, Garry Mac, John Lees and Iain Laurie. 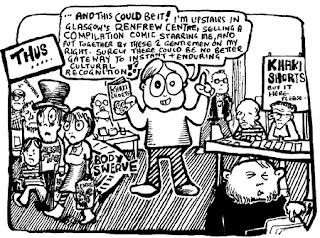 As usual, super big thanks are due to BHP's Sha Nazir, Mark Boyle and Jack Lothian - with whom I had a great first chat at the wrap party - for steering the whole enterprise through another successful summer, only bigger and better than ever before! Further thanks are due to the Renfield Centre and Art School Vic Bar venues, their respective staffs as well as the GCC volunteers who made sure all went well on both days. Thanks too, to everyone who dropped by the table to chat and check out the books and especially to those who picked up copies of our collections new and old - we sincerely hope you enjoy reading them as much as we toiled making them! 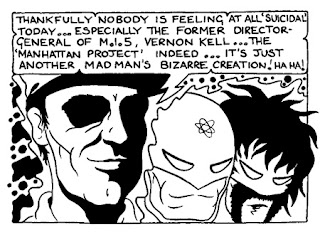 Big Braw! bonus thumbs up to the girl who, after much oohing and ahhing, produced one of the standard "I need to get some money from a cash machine" excuses only to actually keep her word, returning later on to purchase The John G. Miller Scrapbook. A trend duly bucked there! 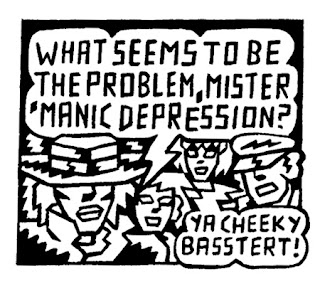 Big Braw! bland thumbs down to the lassie who was easily suckered by the pinpoint accuracy of Kounter Kultyur Kevn, scoffing and saying to her boyfriend how dumb and obvious it was, evidently oblivious to the fact that that's the point - it's a spoof on lazy, dumb and obvious dope comics.... 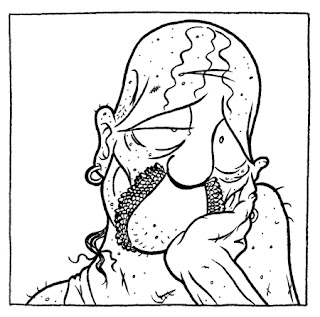 In addition to "boosting the brand", there was plenty time on the Sunday to do the rounds with Space Captain #1: Captain of Space by Michael Park & Chris Baldie, Gonzo Cosmic by Garry Mac and Duality by Norrie Millar proving particularly prized purchases. Check 'em out....

Funny to think that last year we signed off our thanks eagerly anticipating Top Shelf publishing the Bacchus Omnibus and that this year it's actually happening! Ah well, any excuse to fire up my old GGC '14 booklet contribution is well appreciated. More on the big B soon. Cheers, indeed! 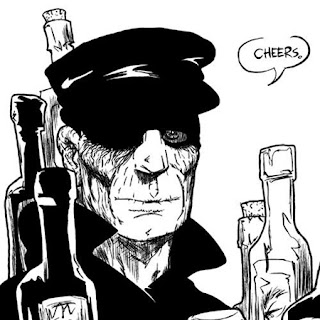 Email ThisBlogThis!Share to TwitterShare to FacebookShare to Pinterest
Labels: A Braw Blog 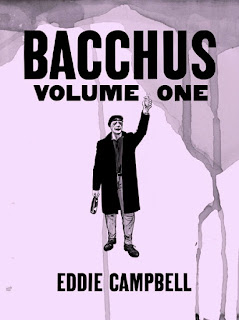 By ye gods (of revelry)! Today sees Top Shelf release the long-awaited Bacchus (Omnibus Edition): Volume One, collecting together the first half of this grand old tale - incorporating the trades Immortality Isn't Forever, The Gods of Business, Doing the Islands with Bacchus, The Eyeball Kid: One Man Show, and Earth, Water, Air & Fire - into one bumper 560 page epic.... 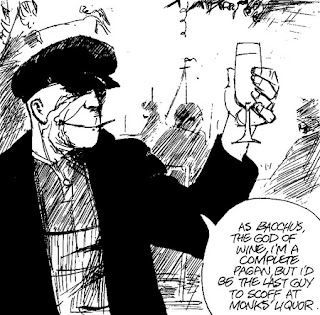 I was lucky enough to read a few of the early trades back when I was lucky enough to share a studio with Frank Quitely (and was luckier enough still to pick up the rest of the somewhat scarce 10 volumes for affordable prices on ebay), being immediately attracted to the character's distinctive look - as per my Kano post, it all goes back to Karloff - obviously helped in part by Eddie Campbell's gloriously sketchy artwork - a prime example of a supreme talent simply making something look far easier than it actually is.... 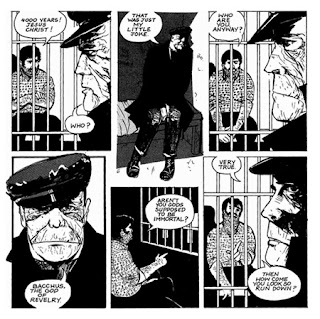 If anything ever truly deserved to be called a "graphic novel" then this is it - something so human, so wonderfully understated (though that's not to say the book isn't without it's fair share of action and drama) and so very alive. When you think of all the meaningless, by-the-numbers-making-up-the-numbers comics that are farted into existence by The Big Two the sheer importance of Bacchus cannot be denied. Don't beg, borrow or steal a copy.... Buy it! 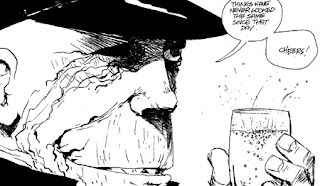 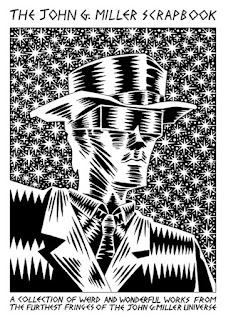 Annnnd in at number 1, it's The John G. Miller Scrapbook! This seriously eclectic tome attempts to encapsulate the far-outer limits of John Miller's unique worldview, collecting together some of the very best of his cult S.H.I.E.L.D leaflets - no doubt familiar to certain bewildered Edinburgh pub goers and commuters - it's 80 pages of genuine underground/outsider genius.... 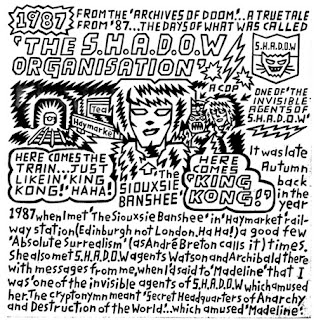 It also gathers together a smattering of unpublished strip work, a gallery of psychedelic posters, leery pin-ups, strange record covers and peculiar postcards.... 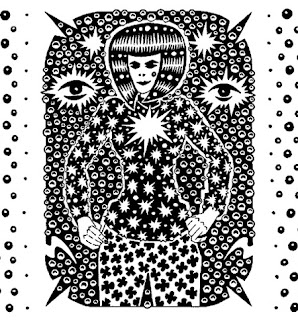 As to the last word, well, we'll leave that to John's sometime sweetheart Lyndy Henderson.... 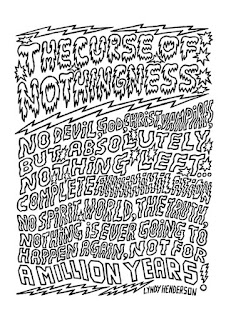 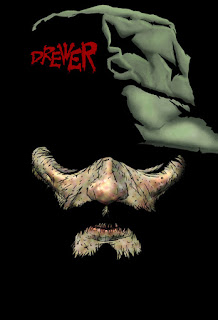 In at number 2, it's Drewer! Not the usual Braw fair, that's for sure, this 24 page sci-fi war-vet adult orientated 'teaser trailer' comic, incorporating 3 short stories is certainly something of a stylistic (though perhaps not thematic) departure for Rob Miller.... 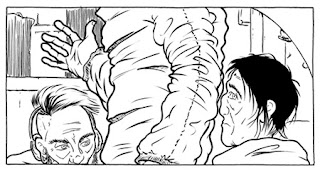 These short tales introduce our titular hero, showing us something of his past and his present environment and inner circle of friends, hinting at the reasons as to just why he is who he is.... 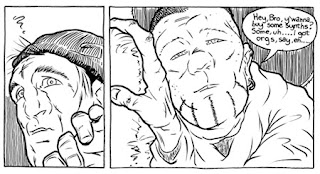 Check it out this weekend at the Glasgow Comic Con....
Posted by noah at 02:33 No comments: 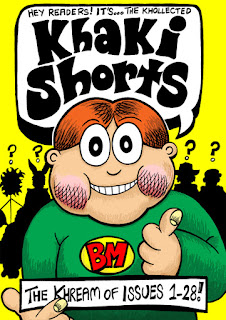 And straight in at number 3, it's The Khollected Khaki Sorts: The Khream of Issues 1-28! Some of you may recall our handy recap on the comic's origins from earlier in the year, and it's fair to say this bumper 220 page choice cuts retrospective stems in part from that occasion. With a book so vast in size where and how do you begin - in Adam Smith and Rob Miller's case, by trawling through all the original photocopy paste-up pages, chucking out the crap and hitting the scanning bigtime - to describe the bountiful goodies therein...? Well, they do say a picture is worth a thousand words - something Rob often calculates when measuring up (and thus justifying) his meagre output against genuine storytellers of the written word - so how about we cut to the chase and do just that?