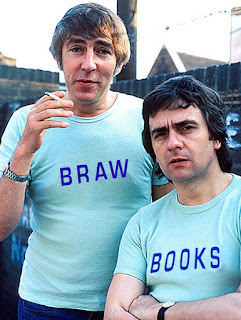 Welcome back for a second helping of the (Braw) best of 2021, effectively the Boxing Day to Part 1's Christmas.... Hmm, though that really just makes it sound like any old reheated leftovers which, much like Xmas telly, is merely the first week reshuffled around and repeated ad infinitum to pad out week two. Without getting too nostalgic for (Radio and TV) times gone by, isn't it strange how we live in a era when there's infinitely more channels and somehow less choice as opposed to when there were far less (only 4!) channels but seemingly more viewing choice over the 'restive festive'. It truly is smaller on the outside.... 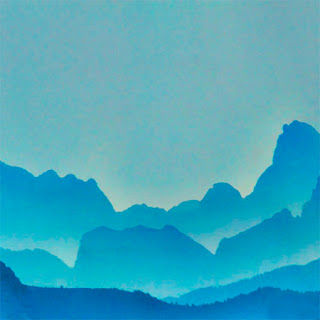 100 Mountains - Summit Up
One of the year's top albums was in fact collated/compiled by Rob himself, who knuckled down and put his idle hands to work sifting through “ex-brains behind The Orb” (his words) Kris “don't call me Thrash!” Weston's substantial online “graveyard” (his words again) of semi-aborted works in perpetual progress. The end result was 100 Mountains – Summit Up, a sprawling, absorbing and oddly affecting (and somewhat chilly and unsettled) ambient trip. Currently AWOL there is a glimmer of hope Kris'll return (momentarily) to the interfray as this encouraging holding picture attests....
FFWD▸▸ (The Orb & Robert Fripp) - Orbert FFWD Demo 1993
As if that wasn't enough Rob was lucky enough to unearth a rare live run through of The Orb's masterful (never released and eventually morphed into FFWD) track Hidden In Heaven, a truly towering 27:27 of similarly emotive ambience (perhaps slightly overloaded with DRAP's samples du jour, although they do help conjure some sort of timeless nostalgic charm) that still has the power to drop jaws nearly 30 years later. The past has never sounded so futuristic. If you fancy some of that in a more stripped back symphonic style then you need look no further than the equally impressive Orbert (as leaked by the above Mr. Weston himself), the glacial demo that was eventually (to its detriment) chipped into several pieces for what became the FFWD album.... 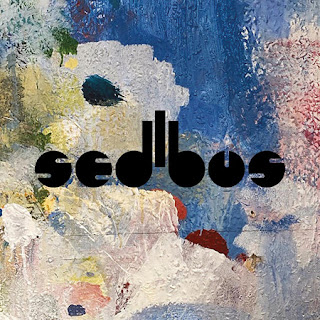 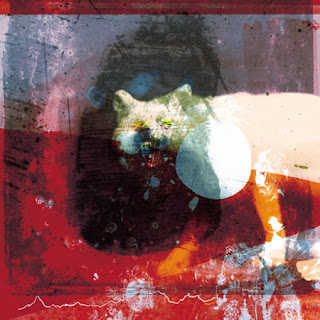 Following on from all that unhealthy orbsessing there really was nothing more cheer-worthy – tinnitus inducing in volume surely? - than Mogwai scoring their first ever #1 album and SAY award with their mighty As The Love Continues. And in their 25th(!) year together to boot.... 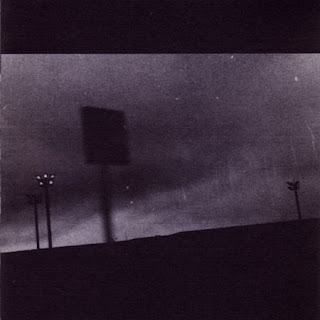 'D'you think the end of the world is comin'?' (YES!)
….although it was really fellow post-rock titans Godspeed You! Black Emperor who truly stole Rob's thunder with their perpetual “end times” (circa 1997 to right NOW!) soundtrack.... 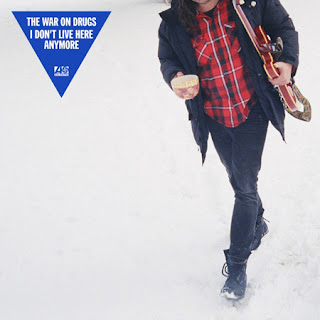 Time surrounds me like an ocean
My memories like waves
Is life just dying in slow motion
Or getting stronger everyday?
Elsewhere The War on Drugs followed their rousing Live Drugs album with the excellent I Don't Live Here Any More, again up to their usual epic-grower standards (and maybe their finest long player yet), while American Music Club cast their woozy magic, FIEND (AKA former Fannie and Young Teamster Brendan O'Hare) impressed with the post-everything ambition of his Caledonian Trilogy, Weathertalk and Landing hit Bandcamp heights, Lift To Experience stunned with their ten commanding The Texas-Jerusalem Crossroads, Pieter Nooten and Michael Brook got all sleek and seductive with Sleeps With The Fishes, The Bug Vs Earth dragged us across their vast Concrete Desert, Mugstar practiced a beguiling form of post-space rock on the marvellous Magnetic Seasons, The Charlatans got all pensive on their uneven '92 downer missive Between 10th and 11th and (finally) Tonstarrtbandht transformed from troublesome noiseniks into shimmering alt-indie troubadours on the rather pretty Petunia, all these albums turning musical itches into gently sweet spots....
Tonstartssbandht - What Has Happened (Official Video) 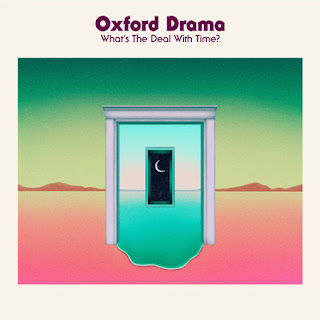 To counter this (mostly) 'miserable but uplifting' sonic self-indulgence a plethora of Polish popsters saved the 'dzien' with Patrick The Pan, Oxford Drama, Muchy and Bluszcz dishing out the good vibes and serving up quality albums, while slightly more challenging, though no less tasty, sounds came to the table courtesy of Trupa Trupa. If you ever fancy a quick overview of the top of the Polish alt-pops then listen no further than the annual Meskie Granie festival/event.... 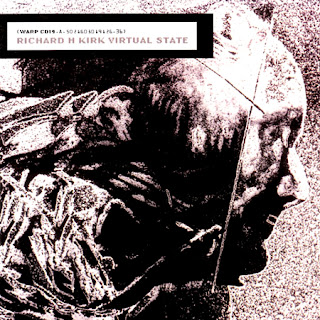 A shame then to say goodbye to musician voyager Richard H Kirk in 2021. Known to many as a member of seminal Sheffield electro industrialists Cabaret Voltaire, but really beloved to Agent Rob for his duo of 90's ambi-electronic-cum-techno albums on WARP Records....
Richard H. Kirk - Oneski 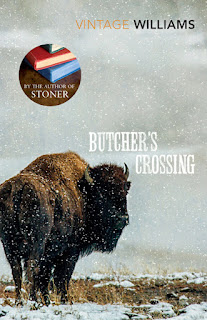 There's no doubt that John Williams (author of the sleeper classic Stoner) scored an absolute bullseye with his book Buffalo Crossing in 2021, making it Rob's book of the year by a wide open country mile. Think green young Boston academic ups sticks for the wild west where he funds a grizzled hunting party (with a Miller at the head, no less) in their search for a once-glimpsed plain awash with dozy buffalo, in an immersive and atmospheric Moby Dick-cum-JAWS tale of man versus (human and mother) nature. Absorbing stuff.... 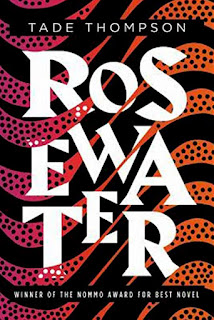 Indeed Masterwork science fiction took something of a back seat in 2021's rocket, with Cryptozoic!, Cities In Flight and More Than Human all really failing to launch, with only the old school stiff upper Brit sci-fi of The Andromeda Anthology and the proto1984-isms of WE reaching orbit. However, the slightly more up to date sci-futures of Richard Morgan's (just alright) Altered Carbon, David Mitchell's stylistic, structural and imaginative triumph that is Cloud Atlas, and the triple-whammy of Tade Thompson's vastly rewarding Rosewater trilogy were proof indeed that there's still life (but not as we know it!) in the shaggy old sf dog tale yet.... 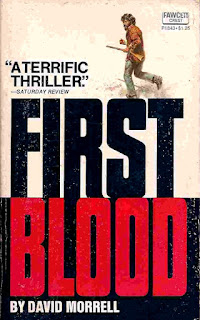 In its stead Rob enjoyed the likes of William Boyd's slow-burn Trio, Cormac McCarthy's burnt world of The Road, Margaret Atwood's bra burning The Handmaid's Tale, the world really is burning woe of Jeff VanderMeer's Hummingbird Salamander and David Morell's fiery First Blood, an excellent companion piece to the film and a truly bruising book in its own right.... the same could be said for the soap burn of Chuck Palahniuk's still fearsome Fight Club too! 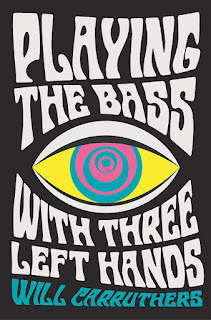 As well as this there was time to absorb a decent clutch of music and film (auto)biographys from the likes of Tim 'One Two Another' Burgess, John 'So Anyway...' Cleese, Will 'Playing the Bass with Three Left Hands' Carruthers, Martin 'Facing The Other Way: The Story of 4AD' Aston and Peter 'Easy Riders, Raging Bulls' Biskind, a vicious, searing book, proof that, film geeks like Spielberg and Lucas aside, every feted male US actor/director of the 70's was a colossal #metoo consumed by an insatiable and quite repulsive appetite for sex and drugs.... 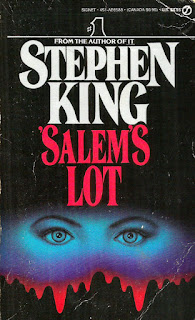 As the nights grew long and dark, the wind chillier then what better time to to take a first step into the vast (nether)world of horror supremo Stephen King, Agent Rob subjecting himself to the jaw (and temperature) dropping 'Salem's Lot, a huge(ly) impressive novel in both scope and vision. It's not just the (pulling) power of the excellent writing, so much as the vivid scenes of terror piling up (much like the unfortunate vampiric victims) in the mind.... Yep, suddenly that gloomy lane on the walk to work doesn't look quite so inviting, shortcut or no, nor does staring into dark spaces or out dark windows less something should peer back from the blackness. Hell, even the hike in energy prices couldn't stop Rob from keeping Braw Towers lit up like a Christmas tree just, y'know, in case. Next stop the Overlook Hotel....
And here's Rob's written quote of the year, culled from the leery Humminbird Salamander,
"A few years later, businesses hawking wares would have changed. The old ones washed away by the shock of realization: the physical laws of the universe didn't give a f*ck about them. Wouldn't protect them just because they existed and sold things."
How pertinent is that post COP-26/everything?! 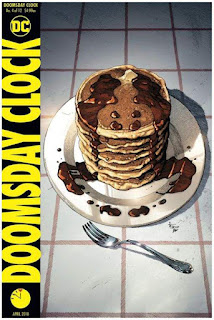 Doomsday Clock - flat as a pancake!
It was the comic everyone was tocking about simply because it ticked them off.... Yep, it could only be DC Comics' Doomsday Clock - or 'DC' for short, ho, er, hum, and about as clever as it gets – which certainly succeeds as an exceptional(ly drawn) exercise in mangling two lucrative IPs together for purely commercial purposes. As a satisfying comic, however, it lurked not only in the towering shadow of its timeless predecessor but also in that cast by HBO's television series sequel, making for an uneven and, as the superheroes/properties piled up and up, uninvolving read....
(It's really the sort of project that DC should have handed to someone fearless like Grant Morrison – his own Pax Americana was as good a response/rebuke to the original Watchmen as any – who would at the very least have done his damnedest to outdo Alan 'The Original Writer' Moore at every twist and turn (of the page) rather than kowtowing to the paymasters and farting out focus group approved fluff....) 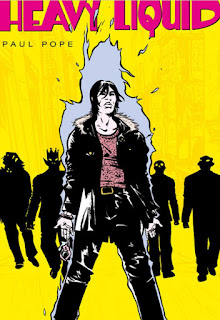 Aside from sinking this titanic undertaking there was still precious time to be found to enjoy scribble and scratch master Paul Pope's 100% and Heavy Liquid trades, while Neil Gaiman's Eternals and the Attack On Titan manga stirred little interest Rob-side.... 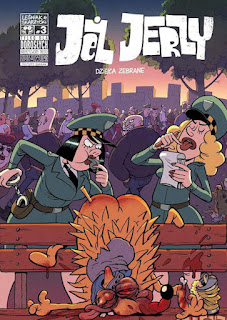 Pole-side, on the other hand, there was a treat in the spiky shape of the third omnibus (of five) of underground/overground comic strip Jez Jerzy, collecting books (Toms) #7, #8 and #0 of everyone's favourite rebellious hedgehog (though this leaves only Tom #9 to pad out the remaining two volumes).... 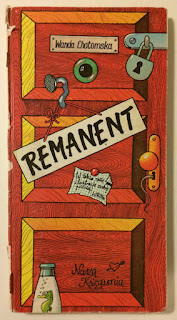 And just for the heck of it here's a few lovely Polish sub-underground illustrations courtesy of Edward Lutczyn (from Wanda Chotomska's 1985 book of children's rhymes, Remanent).... 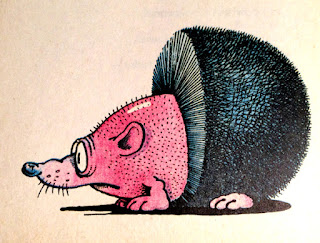 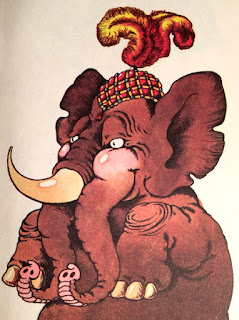 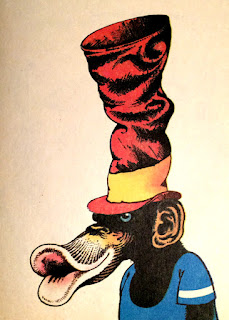 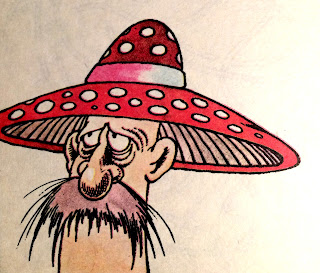 All of which brings us neatly round (up) to this.... 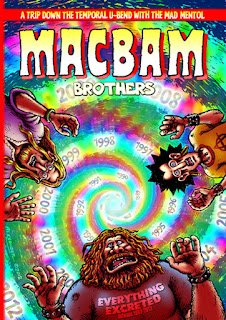 If, looking forward, 2022 is going to be remembered for anything – as, let's (try to) face it, it's proving completely and utterly forgettable already! - then what could be better than Dave Alexander's wonderful MacBam Brothers collection turning 10 years old! (Indeed, this here blog will be 10 years old in a matter of days – good on us!) Why not grab a copy now before LULU put their (and our) prices up early March (or simply sit back and enjoy our FREE Braw Books Sampler PDF available to download >>here....) 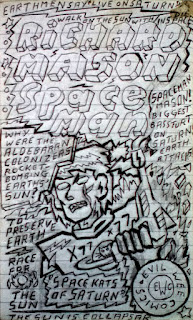 With Braw Towers all but silent in 2021 - no single scratch of pen on paper, no squeaky squirl(?) of the scanner, no fortunate flash of inspiration (just the pitter patter of tiny feet) - you'd be forgiven for thinking it's all over (which it is in a sense, given this blog is a testament to what Agent Rob was doing when he should have been drawing, this hollow man increasingly haunted by comics that might have been....). However, as he prepares to embark on his 68th revolution about the sun there's (suddenly) no shortage of ideas from Agent Johnny which has helped to (re)fuel the creative/publishing fire to some extent. So maybe 2022 will be the year that Braw finally gets it (ie, a new comic) together.... 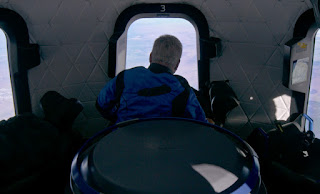 Old Bill boldly goes....
As ever it's time to wrap up this gift of a blog that just keeps on giving with Agent Rob's pick of the year. Naturally there's a flag to be waved for Indiana Jones in Glasgow city centre, a huge shout for 'Shatner in space', and no doubt that not only anything small and Dudley Moore-shaped was in the running, but also a few choice cuts courtesy of Derek and Clive. The Charlatans also hit a home run with their nostalgic yet somehow optimistic video for their recently unearthed/belated 30th anniversary year track C'mon C'mon (as well as errant original guitarist Jon Baker music-making a return as Central-Audio-Thrill). But first past the post (or should that be 'Pole'?) had to be the glorious video for Mrozu's Zlota, which was all of these things and more, the five minute holiday we all truly yearned for in 2021 (and a cracking toe-tapper of a tune to boot)....
Mrozu - Zloto (Official Music Video)
Posted by noah at 06:22 No comments:

Email ThisBlogThis!Share to TwitterShare to FacebookShare to Pinterest
Labels: A Braw Blog, UndergRound Up of the Year
Newer Posts Older Posts Home
Subscribe to: Posts (Atom)