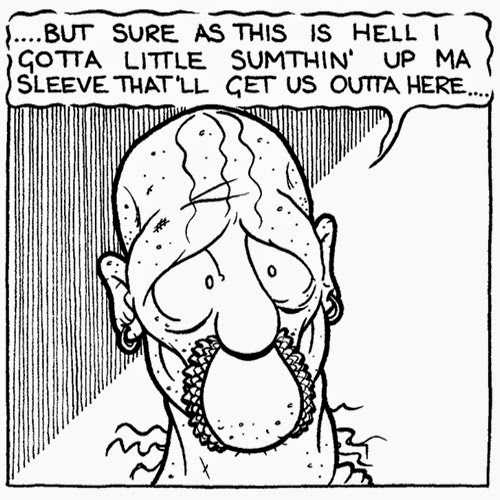 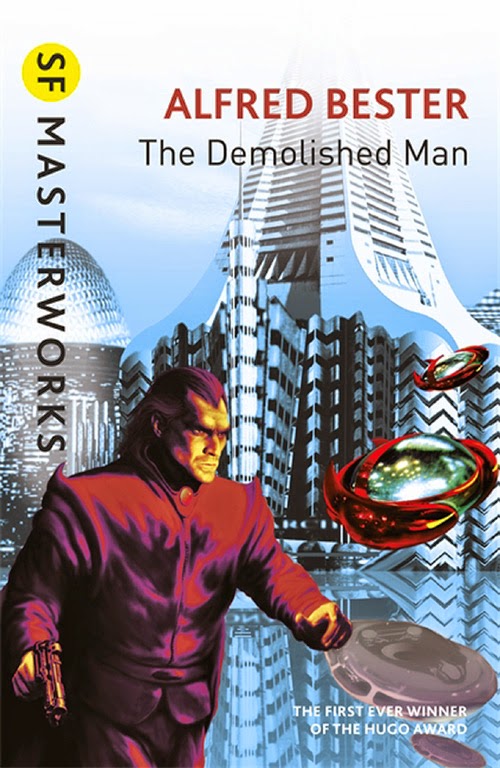 Leisurely stint thru to Dreadenburgh and Ice Station Zebra on Odinsday, catching up with Agent Johnny. The man himself was on grand form, fresh from a revitalising bath and ever eager to begin the day's 'View to a Swill'. First things first, we solved the mystery of the missing photocopies (Agent Rob had left them in the kitchen cupboard!) then discussed the progress of the concluding Evil Hollywood pages, Johnny offering up the ongoing inks fer scrutiny. With them safely out the way and returned to the drawing table, there was nothing for it but to spark a can and fire up the record player, easing ourselves into the mood with some Captain Beefheart. Our Man in Pester Whailes had set aside some books for this Agent, including 2001:A Space Odyssey, Planet of the Apes and Starship Troopers, and was rewarded with a copy of Tau Zero by return. Talk, as ever, drifted to (the conclusion of) The Demolished Man, the August issue of MAD Magazine - our man was suckered by the Captain America and Godzilla taglines - and our Agent's recent endeavours to read the The Shadow novel series. Eventually, several cans later, it was time to take our stewed bodies into the city centre where we discovered that Deadhead Comics had, in the words of (a somewhat distraught) Agent Austin, been 'turned over' in the night. Much consoling ensued and when our Agents finally left, it was safe in the knowledge that the Deadhead community had ably mustered to their Section Chief's aid....

Sounds: Strictly Personal by Captain Beefheart and his Magic Band: Hang 'em High Original Motion Picture Soundtrack by Dominic Frontiere: A Fistful of Dollars & For A Few Dollars More, Music from The Original Sound Tracks of, by Ennio Morricone: The Good, The Bad & The Ugly Original Motion Picture Soundtrack by Ennio Morricone: Flying Doesn't Help by A. More: Nerve Pylon 7" by The Lines: Pandora's Box 7" by Procol Harum (the 'Grande Finale'!)....

Captain Beefheart - Ah Feel Like Acid
Posted by noah at 02:30 No comments: 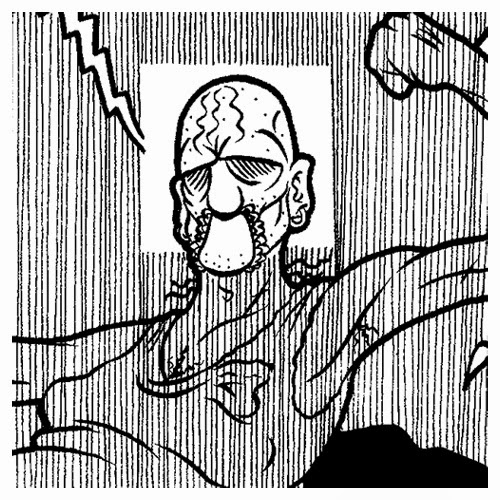 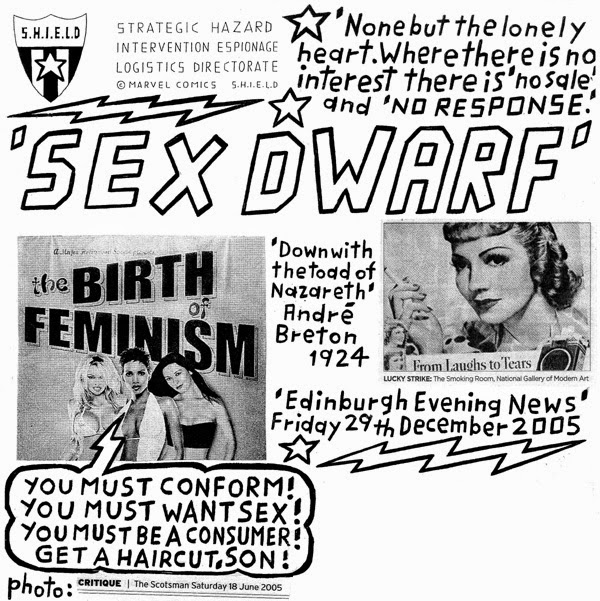 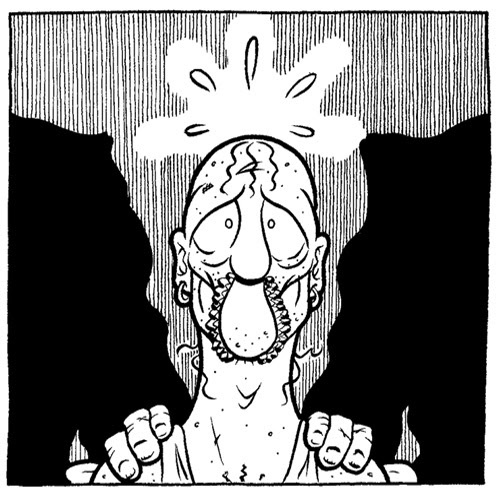 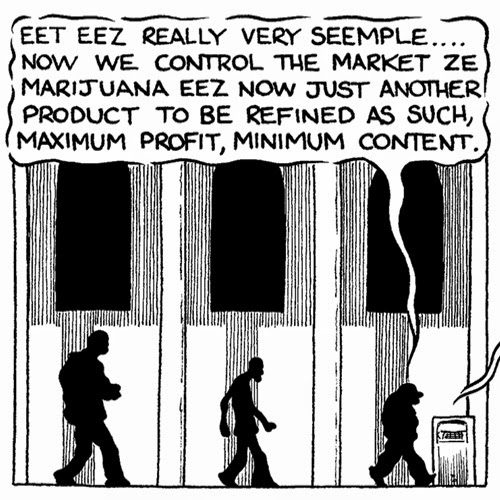 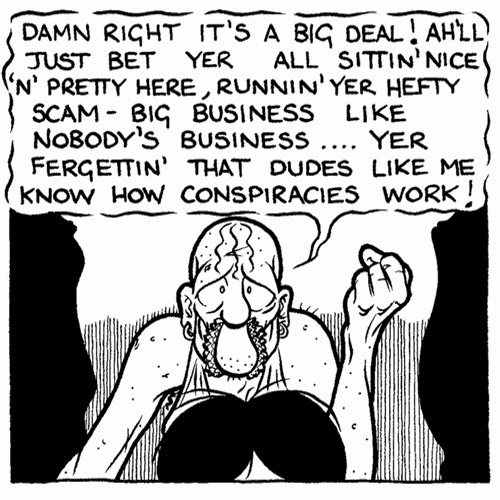 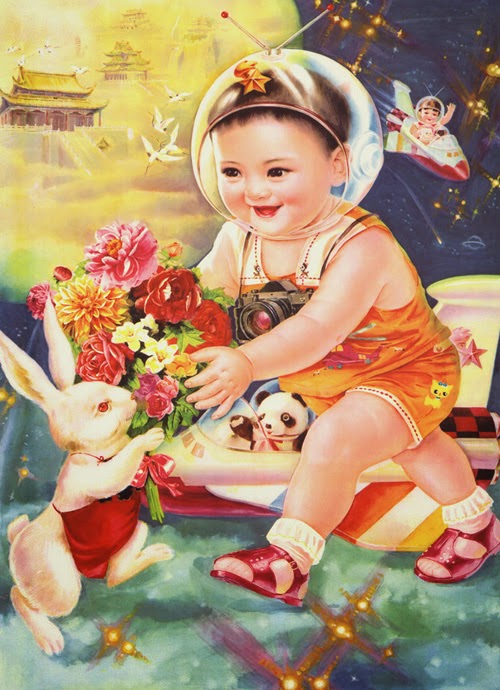 Great wee excursion to Ice Station Zebra yesterday - in spite of they day's enjoyment being put in doubt by Agent Rob's early sighting of an old woman simply scraping along the pavement, her back near bent double, giving as soul crushing an awareness of mortality and the lottery of life as could be expected - to see a truly 'on form' Agent Johnny. OO7 was already 'spinning' quietly in the background upon arrival, Our Man in Pester Whailes quite focussed on his letter writing and duly settled in Ze Smoking Room. The usual initial chunterings abounded as Bond was flipped over (living twice in the case of the second side!). Much of the day's bletherings concerned the Evil Hollywood Over Subterrania dummy and conclusion, Agent Rob returning the former - with his 2 newly completed pages inside - to Agent Johnny only to receive copies of the latter's pencils by return. Yep, it finally looks as if this book is on the final stretch, em, the 2 page introduction aside.... The concluding 7 pages have been scripted and all the parties involved have tucked into their pencilling duties. As the View to a Swill wore on the chat turned to the usual topics, the present repeats of the James Bond fillums, Alfred Bester's novels Tiger! Tiger!/The Stars My Destination and The Demolished Man, as well as Raymond Chandler's The Big Sleep and Richard (AKA Kingsley Amis) Markham's 007 novel, Colonel Sun. Having finished quite the longest swill in a good while, our Agents then departed for the city centre, swinging our trousers by BackBeat Records, dodgin' the Festival crowds, and finally pitching up at Deadhead Comics where we were pleased to find Agent Austin on similarly grand form, the chat there turning to the quality of the recent Jodorowsky's Dune documentary (highly recommended) and the merits of the recent run of She-Hulk. Then, as if to conclude a near perfect day, Agent Rob made an unusually swift return to Glasgore to settle down in front of A Liar's Autobiography (with a few stiff drinks to hand), revelling in the woozy melancholy of it all....

Kim Wilde - View From A Bridge 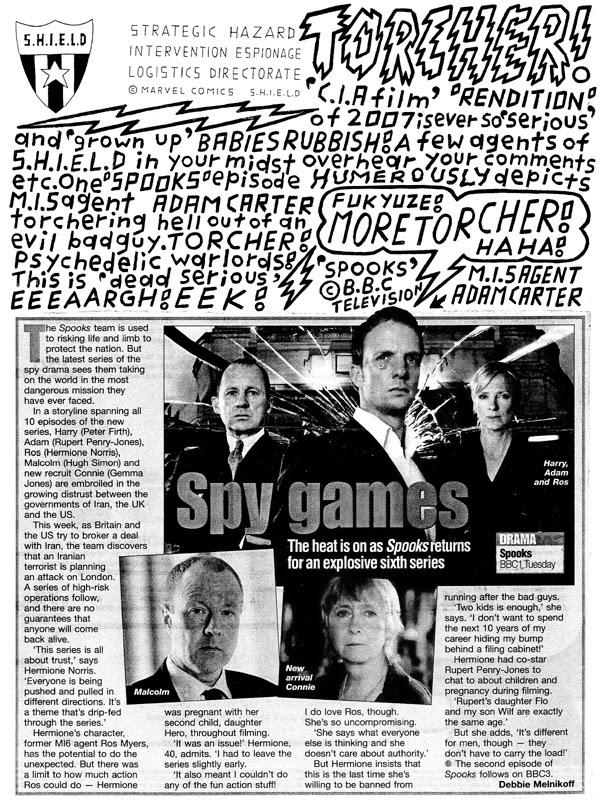 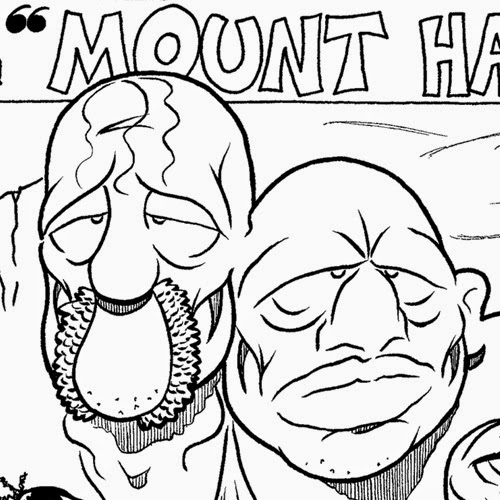