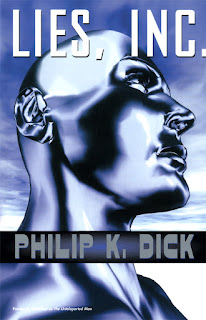 In this wry, paranoid vision of the future, overpopulation has turned cities into cramped industrial anthills. For those sick of this dystopian reality, one corporation, Trails of Hoffman, Inc., promises an alternative: Take a teleport to Whale's Mouth, a colonized planet billed as the supreme paradise. The only catch is that you can never come back. When a neurotic man named Rachmael ben Applebaum discovers that the promotional films of happy crowds cheering their newfound existence on Whale's Mouth are faked, he decides to pilot a spaceship on the eighteen-year journey there to see if anyone wants to return.

Well.... I've previously (perhaps somewhat rashly) branded a book as being the most PKD effort ever. However, and in keeping with the theme of multiple, parallel realities, I can also award such an accolade to this novel (only this is pure PKD of a very different sort). This edition claims to be "its first complete appearance in the United States", published as PKD (more or less) wished it. Previously this book was known as The Unteleported Man, being essentially two early 60's novellas stitched together with (at one stage) additional linking material by another author as several pages of the original manuscripts had gone AWOL. However the afterword at the back of this book assures us "So what you are holding is the first American edition of this novel as Philip K. Dick intended it in 1979 when he prepared this "Lies, Inc." version of The Unteleported Man".

The book begins well enough, the various strands of the plot weaving in and out of each other as is PKD's style. But all of a sudden, about 70 pages in, and at the exact point when we segue from one novella into another, the book takes a very deep and intense (and somewhat confusing) dive, as the main character, Rachmael ben Applebaum undergoes a strange hallucinatory experience going from one location/reality to another.... or does he?

From that point onward, and for much of the duration of the 'inserted' text, it's pretty hard going and you're often left scratching your head, reading back to catch up on the multiple threads, trying to work out what's going on. It certainly runs the full gamut of PKD terminology and I was constantly reaching for the Philip K. Dicktionary to help fathom out words like 'cephalotropic', 'hyperperistalsis', 'gynetropic', 'osteogenetic' and 'mysticomimetic'. However, skimming back through the book to refresh myself for this review it might just be that it needs another read - perhaps with all the WTDick? moments taken care if it'll prove to be a smoother, more enjoyable ride second time around....


The inner face, emerging from the cracked-open gray-chitin mask, now tried to fold up within itself, attempted vigorously to wrap itself in its own semi-fluid tissue. a wet, limp face, made of the sea, dripping, and at the same time stinking; he smelled its salty, acrid scent and felt sick. 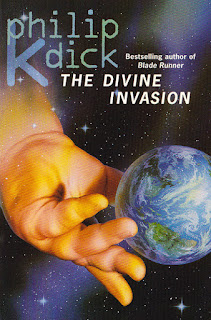 Deep in cryonic suspension, Herb Asher thought he was still happily puttering around in his dome in the star system CY30-CY30B, listening to the latest Linda Fox album.

If only he hadn't been such a nice guy, he'd still have really been there. Instead he married the terminally ill (and pregnant) woman in the next dome and was taken advantage of by an obstreperous local deity (father of his wife's unborn avatar).

And now he had to go through it all again. (The story had been oddly familiar the first time.) Who would have thought that he, Herb Asher, would assist an invasion of his own home planet - even an invasion by the Son of God...?

I was unsure quite what to expect of this novel, the second in PKD's projected VALIS trilogy (which ought to have been completed with the unfinished The Owl In Daylight... only to be complimented by his final work, The Transmigration of Timothy Archer). The preceding VALIS is pretty strong stuff, a book recommended for hardcore PKD fans only, written as it was "In the 1970's, Dick started to concern himself more directly with metaphysical and theological issue, experiencing a moment of revelation - or breakdown - in March 1974, which became the basis for much of his subsequent writing.... Like Island by Aldous Huxley, I found it more of an author's (largely impenetrable) manifesto draped over a rather sparse story, boiling down to characters making huge philosophical speeches at the reader while nothing much of interest happens - I believe Agent Johnny would refer to this, er, technique as "stodgy". See the first extract below for some idea of this particular book's initial (mis)direction....

Thankfully The Divine Invasion only veers off into this territory on occasion. There's not so many sprawling speeches, although characters often quote scripture at one another before they elaborate (or, I suppose, labour) the point. But just when you think it will sink under such a wave of indulgence it pulls back from the brink and recovers its sure(-ish) footing. It helps that the ebb backward and forward flow of the plot here are recognisably "Dickian", Herb Asher being the standard hapless sap who cannot help but get tangled in up to his ears. In fact, were you to remove the overarching religious protagonists and replace them with manipulative aliens you'd be as close to his earlier works as could be. There's plenty enough to enjoy here, especially Asher's (somewhat debilitating) obsession with manufactured singer Linda 'the Fox' Fox that echoes throughout his overlapping selves, his cryonic sleep similarly disturbed by 'soupy strings' versions of Broadway tunes from Fiddler On The Roof, unsettling sounds that constantly nettle him as he negotiates multiple (un)realities. I wouldn't say The Divine Invasion is for 'Kompletists' only - if you're a fan fearing you're nearing the bottom of the PKD barrel this effort's definitely worth a scrape....

He knew, of course, why the Christian-Islamic Church did not allow the transmuting of the Bible into a color-coded hologram. If you learned how you could gradually tilt the temporal axis, the axis of true depth, until successive layers were superimposed and a vertical message - a new message - could be read out. In this way you entered into a dialogue with Scripture; it became alive. It became a sentient organism that was never twice the same. The Christian-Islamic Church, of course, wanted both the Bible and the Koran frozen forever. If Scripture escaped out from under the Church its monopoly departed.

Now, as he sat leaning over her, he saw her eyes shine; he saw spaces beyond her eyes, as if he were looking into something empty, containing huge stretches of space. Where are you? he wondered. It is a universe in there, within your skull; it is a different universe from this: not a reflection but another land. He saw stars , and clusters of stars; he saw nebulae and great clouds of gases that glowed darkly and yet still with a white light, not a ruddy light. he felt wind billow about him and he heard something rustle. Leaves or branches, he thought; I hear plants. The air felt warm. hat amazed him. It seemed to be fresh air, not the stale, recirculated air of the spaceship.