A Philip K. Dick In The Hand Is Worth Two In The Bush.... 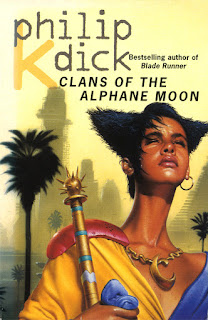 Chuck Rittersdorf, a 21st century CIA robot programmer, decides to kill his wife by remote control. He enlists the aid of a telepathic Ganymedean slime mould called Lord Running Clam, an attrective female police officer and various others, witting or unwitting. But when Chuck finds himself in the midst of an interplanetary spy ring on an Alphane moon inhabited entirely by certified maniacs, his personal revenge plans begin to go awry in this brilliantly inventive tale of interstellar madness, murder and violence.

I doubt there's a book that is more completely and utterly Philip K. Dick than this one.... Just imagine, a seceded (Terran) moon colony on Alpha III M2 derived from an abandoned hospital area  - over 25 years the clans of the title have separated into groups comprising the several sub-types of mental illness, the 'Heeb', 'Pare' 'Mans', 'Poly', 'Dep' 'Skitz' and 'Ob-Com's. (I'll not delve any deeper into their origins as, as ever, the joy is in PKD's gentle drip drip approach to his terminology and world building.) Meanwhile back on Earth the somewhat directionless Chuck Rittersdorf is programming CIA simulacrums and, as his marriage crumbles - PKD again employs a young temptress in part to help usher our hapless, hopeless, clueless "Joe Blow" on his way - he slowly, via the offer of writing for television, stumbles upon conspiracy within conspiracy. Just who is actually working for who, and quite why, to what ends? There's no pipes connecting the kitchen sink here as for once PKD opts to skip the notion of overlapping or underlying realities, but that doesn't detract in the slightest from what is a highly accessible, imaginative and rewarding read....

... But his eyes. He had an alert yet warm quality; she rose and stood facing him. Over the TV the strength of his gaze did not register. This was not mere intelligence on Bunny's part; this was more, a perception of - she did not know what. And -
All about Bunny an aura hung, an aura of suffering. His face, his body, seemed sopped with it. Yes, she thought, that's what shows in his eyes. Memory of pain. Pain that took place long ago, but which he has never forgotten - nor will he. ...


... She smiled, and once again he marvelled at her teeth; they transformed her face, made it beautiful; as long as she smiled and she was delightful to behold, and it seemed to Chuck that this told something about her. The quality of beauty arose from within; inside, she was lovely, and he realized that over the years, as she aged, it would gradually work its way outward, influence the surface. By the time she was thirty or thirty-five she would be radiant. ... 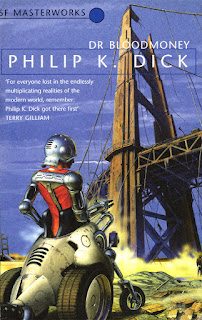 Seven years after the day of the bombs, Point Reyes was luckier than most places. Its people were reasonably normal - except for the girl with her twin brother growing inside her, and talking to her. Their barter economy was working. Their resident genius could fix almost anything that broke down. But they didn't know they were harbouring the one who almost everyone left alive wanted killed.

An excellent Philip K. Dick novel (which I first encountered in its truncated form as 'A Terran Odyssey' in the 'We Can Remember It For You Wholesale' short story collection). This time we have everything and the kitchen sink in this tale of a post-apocalyptic California. However, the book has quite a gentle pace and a sunny, pastoral feel, the restructured society, though obviously chaotic, is still mostly beholden to the very same personal troubles that inflict us as individuals (but here it's mixed with a whole host of the furthest-out PKD characters and scenarios). Some of PKD's very best ideas reside here, in what is a hugely satisfying read....

Stuart said , "Now." He knew it was now; he knew that the bombs were going off - he felt them. It seemed to occur inside him. Blam, blam, blam, blam, went the bombs, or perhaps it was the things sent up by the army to help, to stop the bombs; perhaps it was defense. Let me down, Stuart thought. Low as I can be. Let me into the ground. He pressed down, rolled his body to make a depression. People lay now on top of him, choking coats and sleeves, and he was glad; he did not mind - he did not want emptiness around him; he wanted solidness on every side. He did not need to breathe. His eyes were shut; they, and the other openings of his body, his mouth and ears and nose, all had shut; he had walled himself in, waiting.
Blam, blam, blam.

He (Walt Dangerfield) struggled up, disconnected himself from the straps, saw through the port the world below. Clouds, and the ocean, the globe itself. Here and there on it matches were lit; he saw the puffs, the flares. Fright overcame him, as he sailed silently through space, looking down at the pinches of burning scattered about; he knew what they were.
It's death, he thought. Death lighting up spots, burning up the world's life, second by second.
He continued to watch.
Posted by noah at 00:43