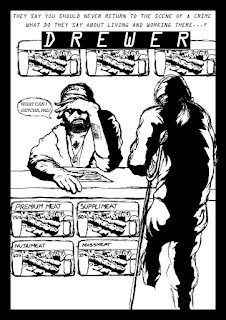 This is the original 'pitch' for Drewer, originally created for the (long time dead) Comics Corner Ning site. (I think this early look was in part inspired by the stylings of Steve Mason of The Beta Band.) The image was accompanied by a (private) page of A4 that outlined the initial story and developing ideas.... 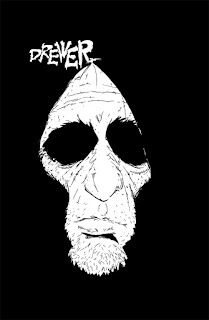 Above is the cover for the never realised second issue - printer problems stalled the first issue and, by the time it limped into the public (comic) consciousness a year late(r), all the creative and drawing momentum was gone - truth be told working in a sharper, realistic style is, in terms of paying attention to continuity and maintaining artistic and character consistency, absolutely EXHAUSTING! Over the proposed 4 issue run of short stories each cover was to have featured a main character's face in a similarly distinctive moody style. Still, for anyone remotely interested in how things might have played out, you can just mush Tom Hardy's Taboo into the Jaoquin Phoenix vehicle You Were Never Really Here and you're pretty much there....
Posted by noah at 02:31

Email ThisBlogThis!Share to TwitterShare to FacebookShare to Pinterest
Labels: A Braw Blog - From The Vault